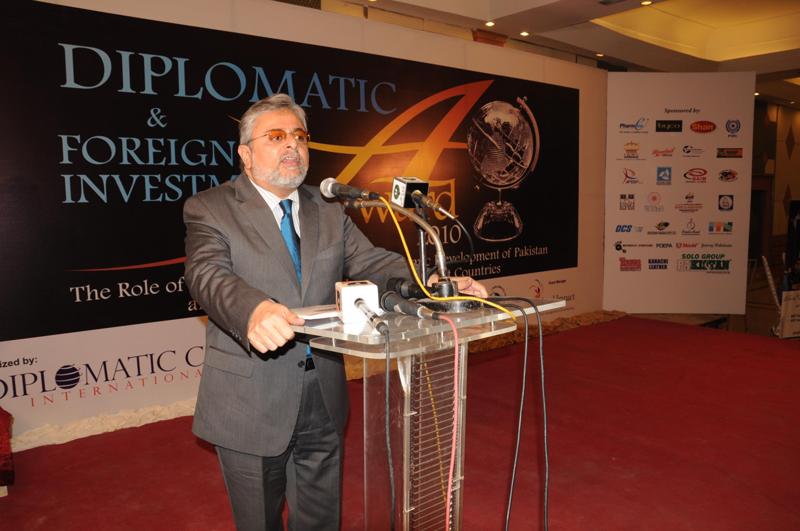 1st Diplomatic & Foreign Investment Award 2011 The role of diplomats, foreign & local investors in the socio-economic development of Pakistan On 7th May 2011 at DHA Golf Club Karachi

For the first time in the history of Pakistan, the 1st Diplomatic & Foreign Investment Award 2011 was held at DHA Golf Club Karachi, Honorable State Minister, Chairman Sindh Board of Investment Mr. Zubair Motiwala was the Chief Guest at the Ceremony. The event was organized by Diplomatic Forum and managed by Diplomatic Call International.

Mr. M. Asif Haroon, Founder President, Diplomatic Forum came up with this unique idea to help in building a softer image of the country by highlighting the investments that is being done in the country by the foreign and local investors. He organized the 1st Diplomatic & Foreign Investment Award in 2011.

The Diplomatic Forum is an independent, a non political and nonprofit body. The Forum is backed by prominent businessmen and former diplomats of the country with the objective to give awareness to the people of Pakistan for the role of diplomats and foreign & local investors in social & economic development of Pakistan.

Honorable State Minister, Chairman Sindh Board of Investment Mr. Zubair Motiwala, appreciated the role of foreign & local investors who are playing a vital role in the social and economic development of the country. He further said, “Diplomats are playing the role of a bridge to bring foreign investment in Pakistan”.

The main highlight of the ceremony was the distribution of the Awards to the Diplomats, Foreign Investors and local companies for their top most investment in Pakistan. Award winner countries were U.S.A, China, Malaysia, Oman, Thailand, Bangladesh, Saudi Arabia, Russia, Qatar, Switzerland and Sri Lanka.