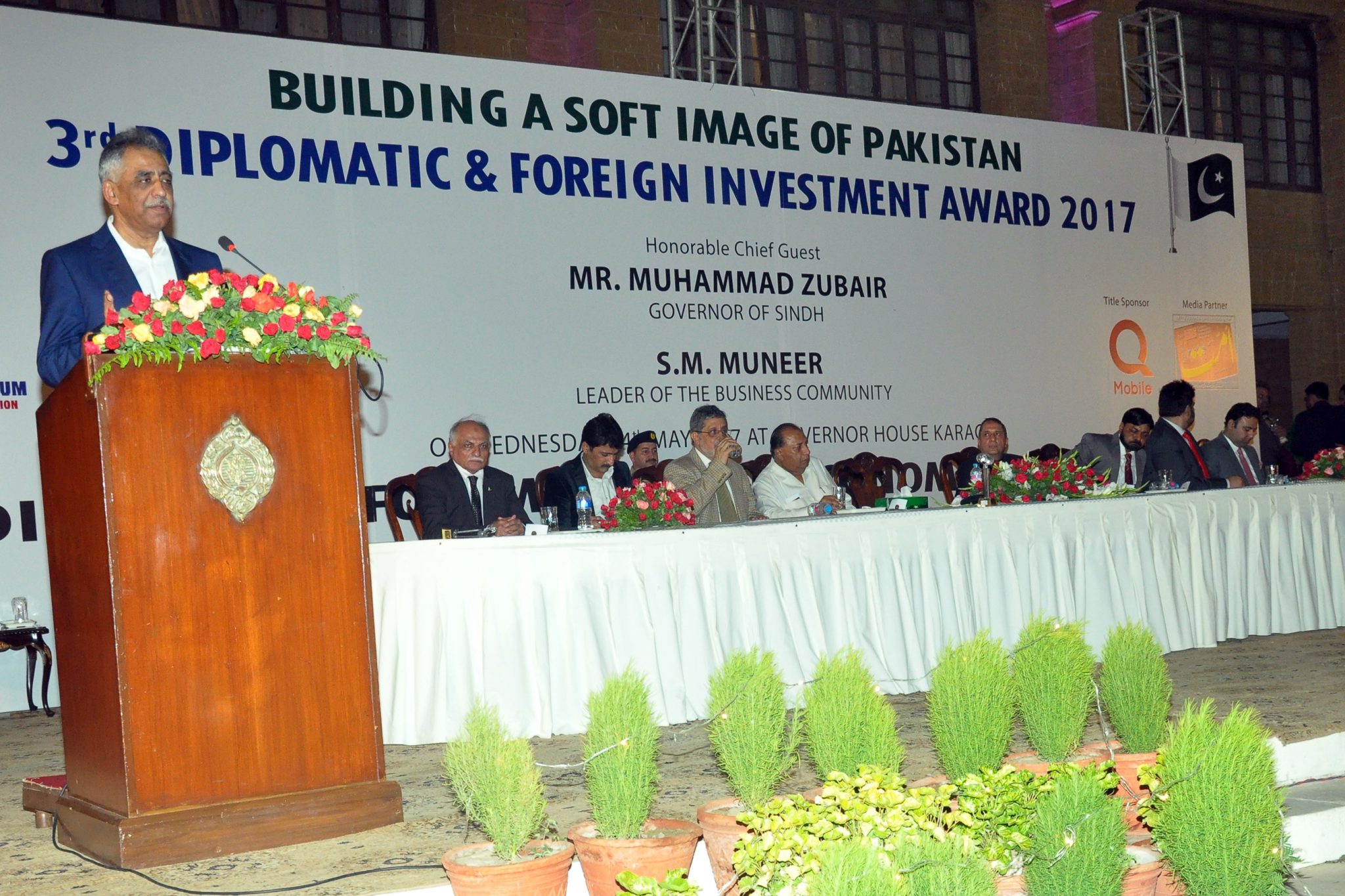 3rd Diplomatic & Foreign Investment Award 2017, The role of diplomats & foreign investors in socio-economic development of Pakistan On 24th May 2017 at Governor House Karachi

The first diplomatic and Foreign Investment Award was successfully organized and held in 2011 & 2016 at Governor House Karachi to give due recognition and appreciation to Diplomats, Foreign & Local Companies for their role in social and economic development of Pakistan. There has never been such an encouraging activity in Pakistan before.

There was a need to enhance trade, imports, exports, manufacturing, assembling and production, to build a positive and vibrant image of Pakistan to the world to recognize as an investment goldmine. The mission of the Forum is to utilize all resources available to bringing a change for future generations to come for peace and prosperity.

Diplomatic Forum organized the 3rd Diplomatic & Foreign Investment Award 2017, in  May 2017 at the Governor House Karachi, the Chief Guest was the Governor of Sindh Mr. Muhammad Zubair and Guest of Honor was Mr. S.M. Muneer, Chief Executive, Trade Development Authority of Pakistan.

The Governor of Sindh, Mr. Muhammad Zubair, said the Government of Pakistan as well as Sindh Government has taken many constructive steps to build the confidence of foreign and local investors; therefore, we are now on the right track. I am confident that if we continue our investment friendly policies, both at the national as well as provincial level, we will certainly achieve the desired economic growth in coming years.

He said, that Foreign Investors have been playing a key role in the economic development of Pakistan for a long time. It is a fact that presently multinational companies of China, USA, UK, Germany, France, Italy, Middle East and the United Arab Emirates are doing great business in our country as well as in Sindh Province.

Mr. Zubair recognized the positive role of foreign diplomats in Pakistan as they have made all possible efforts to convince the multinational companies of their respective countries to invest in Pakistan as well as Sindh province.

S.M. Muneer, Chief Executive, Trade Development Authority of Pakistan, said, peace is a necessary precondition for sustained economic growth and prosperity for a country, any region and in broader spectrum, to the whole world. But it can also work the other way.

Economic stability and a rising prosperity that is broadly shared both within and among countries can foster peace. This is most likely to happen in an atmosphere of economic cooperation of a multilateral approach to economic and political problems.

Mr. Muneer said, in the post World War – II era, states have decided to establish a new global partnership in order to meet the challenges of environment and development.

This partnership commits all states to engage in a continuous and constructive dialogue, inspired by the need to achieve a more efficient and equitable world economy, keeping in view the increasing interdependence of the community of nations and that sustainable development should become a priority item on the agenda of the international community.

It is recognized that, for the success of this new partnership, it is important to overcome confrontation and to foster a climate of genuine cooperation and solidarity.  It is equally important to strengthen national and international policies and multinational cooperation to adapt to the new realities.