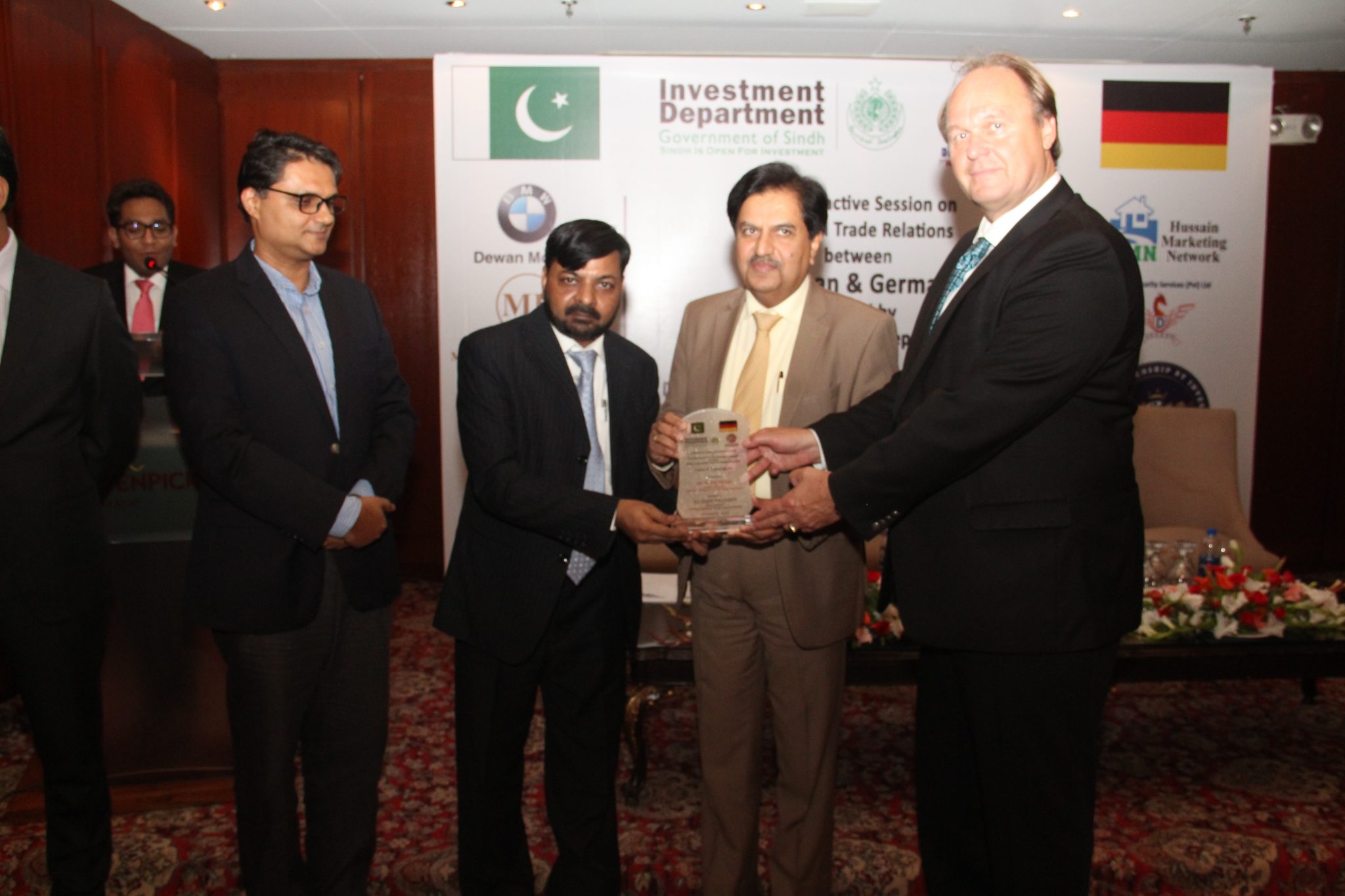 Diplomatic Forum organized an interactive session to promote bilateral trade between Pakistan and Germany with H.E. EUGEN WOLLFARTH, Consul General of Germany in Karachi.
on 24th June 2019 at MovenPick Hotel Karachi in collaboration with Special Economic Zone Management Company, Investment Department, Government of Sindh. Mr. Mumtaz Ali Shah, Chief Secretary, Government of Sindh also consented to be the Guest of Honor for this ceremony. He congratulated Diplomatic Forum for organizing this informative session of bilateral trade. During his speech he said, “Sindh is the land of opportunities. I would like to invite all the foreign & local investors to take active part in the development of this province.” He further said that, “I would welcome any investor from Germany to join hands with the Government of Sindh for a mutual benefit.”

The ceremony started with the Welcome address by Mr. Ahsan Ali Mangi, Secretary, Investment Department, Government of Sindh in which he welcome all the participants and panelists of the session.

A brief presentation was also given by the Director Admin of Investment Department, Mr. Tariq Manzoor on the investment opportunities in the Sindh province. During his speech he discussed the geography and demography of the province and said that, “Karachi Port is the oldest port of country and most of foreign trade is conducted through this port. This handles 60% of the nation’s cargo amd Bin Qasim Port, situated in Indus delta region at a distance of 28 nautical miles in the south-east of Karachi on the trade route of Arabian Gulf. The port currently caters for more than 40% of seaborne trade of the country.” He further discussed the major sectors of Sindh and the potential of investment in these sectors. He said that, “Investment Department is helping the investor in Promoting, bridging, developing the business.

He concluded that, “The objective of SEZMC as body corporate is to facilitate domestic and foreign investors to invest in the manufacturing sector offering them special exemptions and incentives leading to reduced cost of doing business with efficient infrastructure through the development of Special Economic Zones under SEZ Act 2012 in Sindh.

The SEZ Act 2012 was passed by the Parliament in 2012 and subsequent amendments were made therein in 2016 to make it more business friendly.

This interactive session facilitated local business community to interact with foreign diplomats and investors to explore and prospect business possibilities and favorable trade for the betterment of economy. During the session, participants discussed and shared their views about trade and how to boost import and export for the well-being of the both countries.

Many important topics like Investment opportunities on Pakistan and Germany, Statistics about the Trade, Bilateral relations between the two countries were discussed during the Question & Answer session.

H.E. EUGEN WOLLFARTH, Consul General of Germany in Karachi in his speech appreciated Diplomatic Forum & Investment Department for its efforts to promote trade between the two countries.

In his speech, he said “I would like to thanks all the panelists to discuss the potential areas of cooperation between Pakistan & Germany. I Believe Pakistan & Germany have strong bilateral relations from a very long time. I would like to invite all the participants to visit Germany to see the possibilities of investments between the two countries. Thank you once again for inviting me to be a part of this informative Interactive session.

“I am grateful to all the Managing Committee members & I would also like to appreciate to all Dignitary Guests, Ladies and Gentlemen for their presence and support for making this event a valuable one.

I hope that the session organized today was informative and will help in enhancing trade between Pakistan and Germany. We will also be organizing sessions of similar kinds in the future.”